The Art of Smoking

I hate smoking. I did it for maybe 10 years from about the ages of 18 to 28 smoking a pack of 20 fags a day and when I got on the beer I'd put away 2 packs. I remember the day I decided to give them up. The wheezing, the breathing through my teeth. I was often short of breath. Here I was in a 28 year old body (looking something like a Newfie Jim Morrison) which I had beaten up somewhat over the years but I was in still in great shape despite the abuse. Breathing like this made me think "what the fuck am I doing to myself". There was also an added incentive. I couldn't help thinking of some psychopath sat in his big fancy office getting rich knowingly poisoning  people! What kind of people would do that?

I guess you can say smoking used to be more of an art than it is now. It's hard to believe there used to be a time when marketers used to sell smoking as glamorous and healthy. Hope we are a lot smarter now. 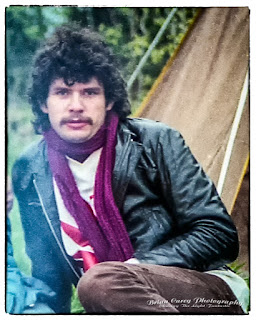 Yours truly in his mid twenties.

For more black and white as well as color portraiture please click here to visit our Chasing the Light Fantastic photo galleries.
Posted by Brian Carey Photography at 9:06 AM No comments:

Passing of the Storm

I’ve been photographing Norman for the last 5 years or so when I head downtown doing some street photography trying to capture the character and color of the area.

Norm was one of my favorites. He was always animated in front of the camera and enjoyed the experience very much! He always had a story to tell and I remember many a time when I passed by with an appointment to make I had to drag myself away because I couldn’t get a word in. He loved to yak!

It’s amazing how a man who had so many problems in his life could be trying to be funny or entertaining. Maybe I could put it this way he often seemed “light in life”! Maybe it was a mask, I don’t know! His love of alcohol was a driving force in his life! I've had those problems too. Not to his extent because I slayed the beast but maybe that connection in some respects is why I really liked this guy, I understood him! I think most of us would call it an addiction but I think he might call it a lifestyle choice! 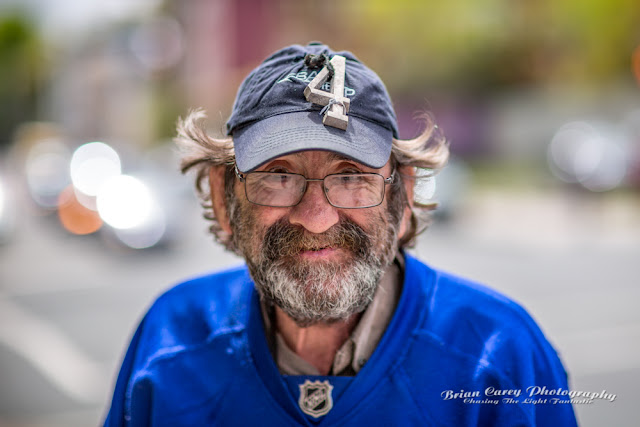 Yesterday I dropped of a portrait of Norm to Mackenzie at FogTown Barber & Shop. The people at the shop have been very good to him over the years and he frequented there often. The portrait was one my favorites. It was the one of him with a number 4 tied to the front of his baseball cap! Mackenzie told me he had taken the number 4 from the front of the building and tied it to his hat. We all had a great chuckle!

Even in passing Norm the Storm is still making us laugh!
Posted by Brian Carey Photography at 6:27 AM No comments: