The Valley of the Shadow of Death

We often think of great photographs being taken at the decisive moment. That moment in time when something unique or important happens. However  sometimes an iconic image can be taken after the fact. Sometimes what's not there is also important as it lends to the imagination. Such is the case for "The Valley of the Shadow of Death"! 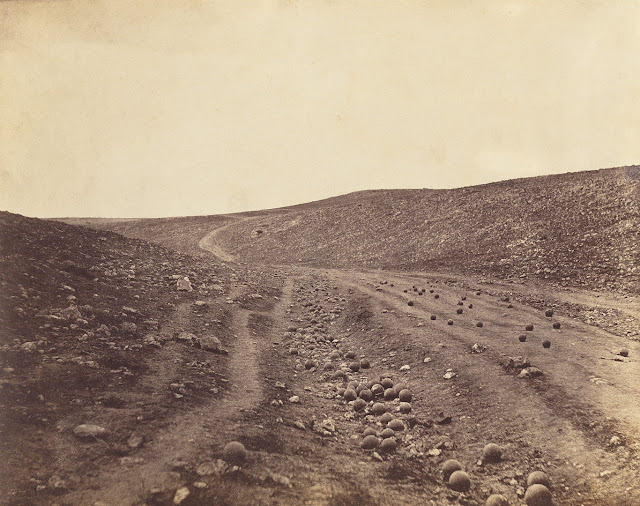 "The Valley of the Shadow of Death" is a photograph taken by Roger Fenton in 1855 during the Crimean War. It's a photo you have to take a good look at to understand and appreciate!

It is taken after a battle in a gully littered with cannon balls. No bodies, no dead soldiers or animals, just cannon balls. One can only imaging the horror the soldiers must have felt as these canon balls rained down on them!

"The Valley of the Shadow of Death" has been included in Time Magazines Top 100 photos the most influential images of all time.

Posted by Brian Carey Photography at 5:58 AM No comments:

Email ThisBlogThis!Share to TwitterShare to FacebookShare to Pinterest
Labels: Crimea, Crimean War, iconic, photography, The Valley of the Shadow of Death, war 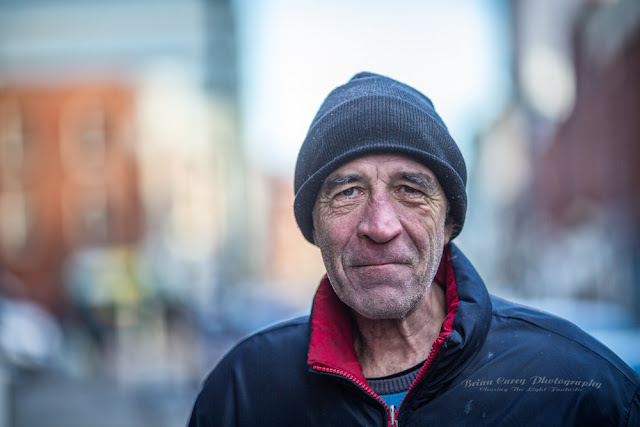 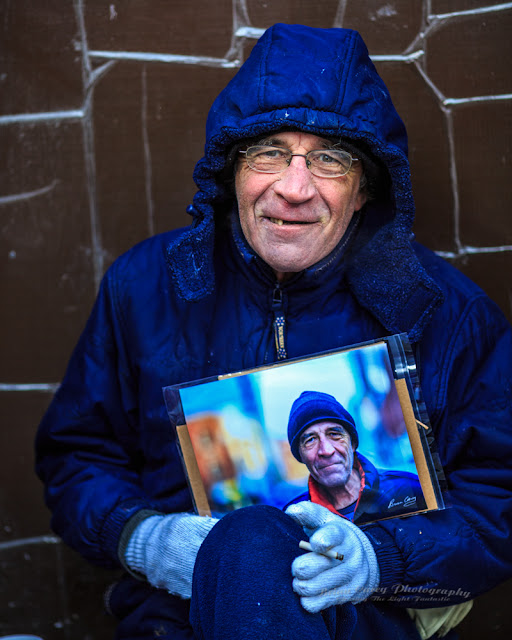 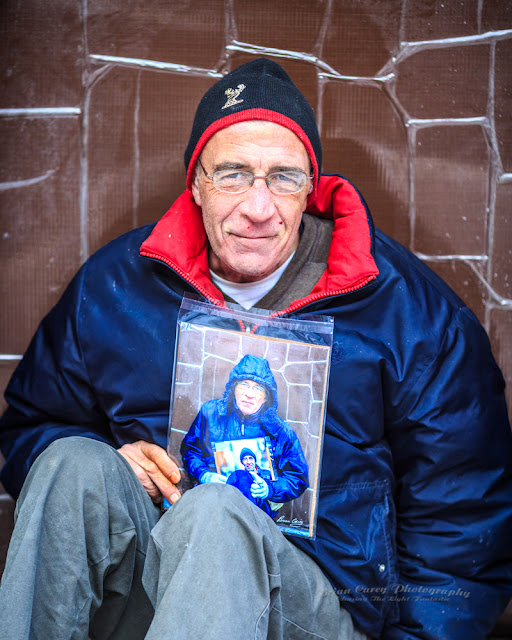 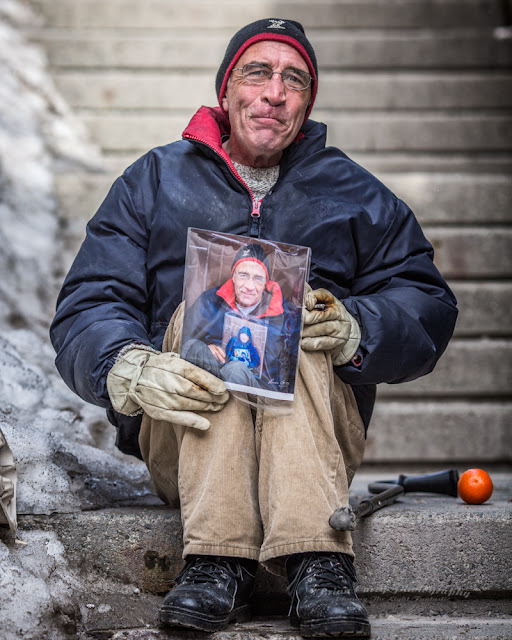 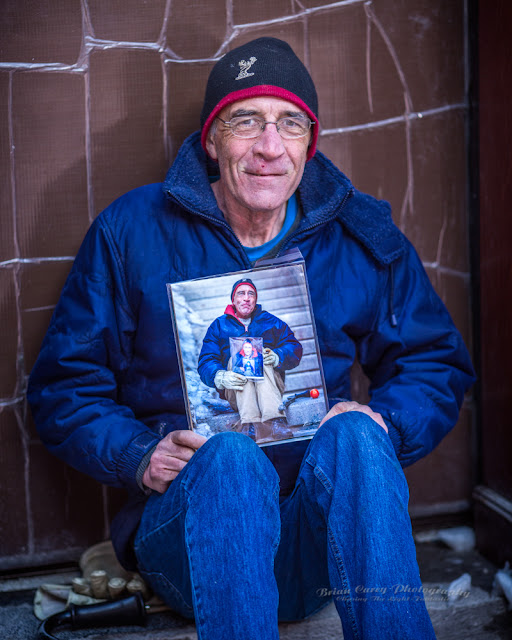 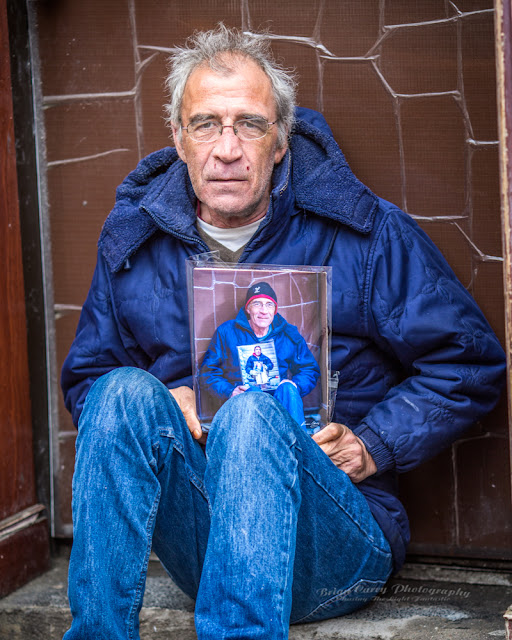 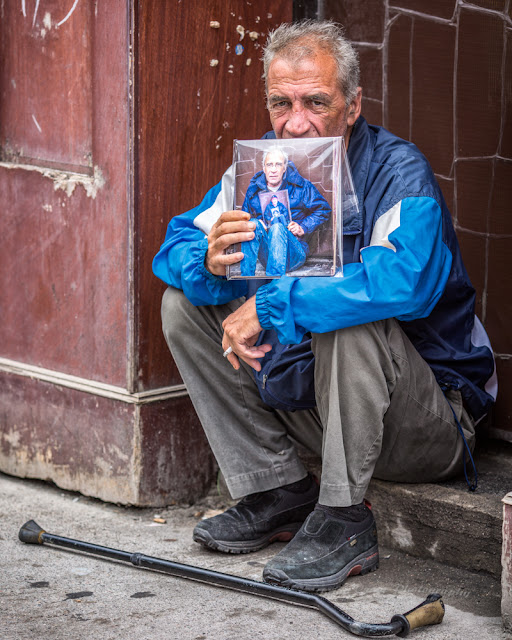 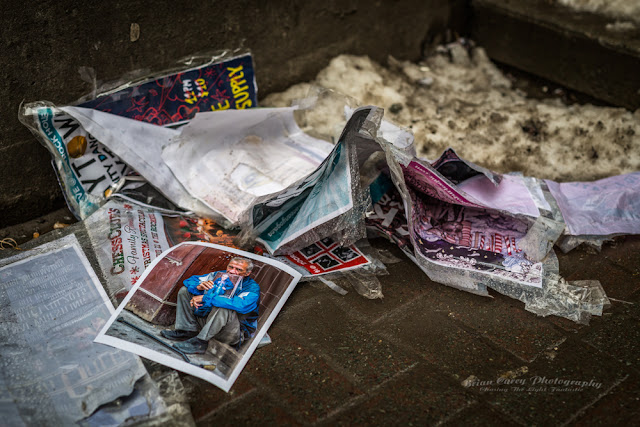 Posted by Brian Carey Photography at 12:15 PM No comments:

We don't always have time for Tim Horton's

Over the last couple of years, I've been trying to move my street photography along. I'm happy with the work I've done over the years; I wanted the photo to take a good look at the person I was photographing and with any luck bridge the gap between the subject and the observer. I did this by focusing on portraiture using a telephoto lens. This lens gave me the freedom to stay out of a person's personal space (so they would have a better chance of feeling relaxed) while at the same time allowing me to capture a up-close and personal portrait. I should add that I almost always asked permission too.

These days I want to let the world speak for itself, I'd like to tell more of the story. I still want to be creative and capture images that have something to say but I want it to be raw, to be real and perhaps show people what they might not want to see or are unaware of! Also this observer, the photographer, will be removed from the "picture". These images will not only reflect the people but also the environment around them.

Most of us want to live in a society driven to solve social ills. Certainly that is one of the pillars of any successful civilization, to make conditions better for the people and the environment around them. In order to do this we have to talk, we have to have some dialogue about our community and the world we live in as it is.

These photos are a contribution to that dialogue.

"We don't always have time for Tim Horton's" was taken on the streets of Toronto and was a winner at the 2016 Newfoundland and Labrador Arts and Letters Competition.

Posted by Brian Carey Photography at 10:11 AM No comments:

I'm not a big fan of "paying it forward". Don't get me wrong it's not the idea of being nice to someone that I have a problem with but it's the thought that you will get something in return for doing so. It's a little like expecting Karma to hand each their justice, it would be nice but it doesn't work that way.

The pay it forward idea can be little self-serving for me, too egotistical! It's as if "Pay it Forward" is some sort of reward system. You would think doing it because it's a good thing to do is enough!

As you may know I've been doing street photography downtown for the last 8 years and I prefer to go down when it's snowing and sometimes on a very cold winters day. I do this for no other reason than to do something different. I get bored doing the same thing over and over.

I do have gloves with me but can't operate my cameras with them on; not surprisingly my hands can get very cold. Sometimes I go to the men's washroom and use the hand dryer to warm my hands and heat my gloves. Often times I will go into one of the coffee shops and get myself a coffee. Cradling a hot coffee is sure a lovely feeling when your hands are a bit numb!

One very cold February day in 2015 I went into Atlantic Place for a coffee and bumped into Wayne. I have photographed Wayne a few times and got to know him a bit, soft spoken and nice is how I would describe him. I asked him if he wanted a coffee and a sandwich. We went to the Starbucks counter to order and when we got the order the gal at the counter wouldn't take my money. She said someone had left some money with them in case someone came in and couldn't afford to pay.

Someone did something nice with no expectation of reward! There are some lovely people out there!

Posted by Brian Carey Photography at 4:46 PM No comments:

Tom Tom on the Radio

Everyone Hates Tom Tom! At least that's the way it might seem downtown sometimes!

People who know him and see him downtown may even cross the street to avoid him. I can't say I blame them, he has a history of being aggressive with people but I thought I would try to shed some light on the situation.

My first experience with Tom Tom was not a pleasant one. One summers day, three years ago on Duckworth St, I asked him if I could take his portrait and his reaction was to draw back his fist as if to strike me! As a fairly big guy who has experience with various martial arts I am not easily intimidated but I did get a fright. I stepped back, took a few breaths and regained my personal space. I was momentarily lost for words but I wasn't completely surprised. I had seen him around for some years and talked about him with other people. We knew what he was like and I knew he definitely has some psychological issues. That realization helped me not to take this "confrontation" personally!.

I don't know how life has been for him over the years and he seems much calmer these days. I've seen him many times over the last year offering to fist bump passersby. He seems to have settled a bit!

I did get to photograph him after our first encounter and gave him a copy and now every time I see him he tells me about it. He has it hung up at home on his wall. But I wanted to photograph him again, this time I wanted to get him holding his radio, that's the Tom Tom we see around! He'll get a copy of this one too!

For more please visit our website "Chasing the Light Fantastic".

Posted by Brian Carey Photography at 2:57 PM No comments:

Buskers add to the vibrance of any city and this is certainly the case in St John's Newfoundland. We have buskers who perform year round and we also have the annual St John's Busker Festival every summer which draws thousands of people downtown. While some people do it for the fun of performing most rely on the income from busking for their basic needs. In addition to this they also have to deal with the cost of maintaining their instruments. 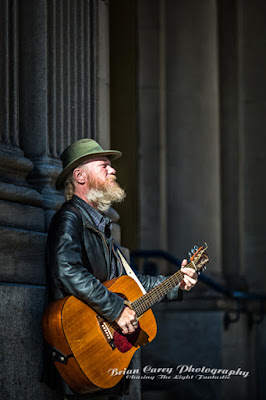 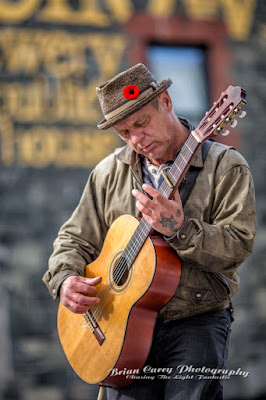 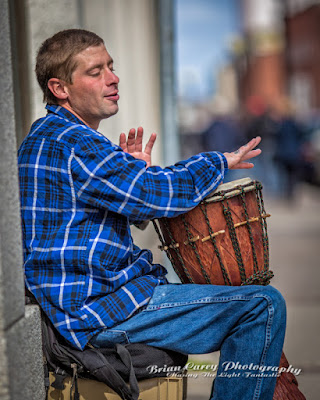 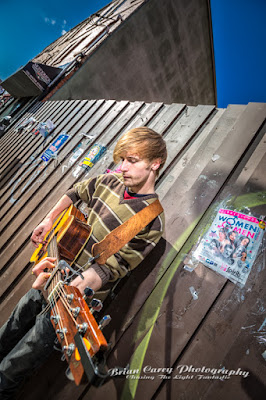 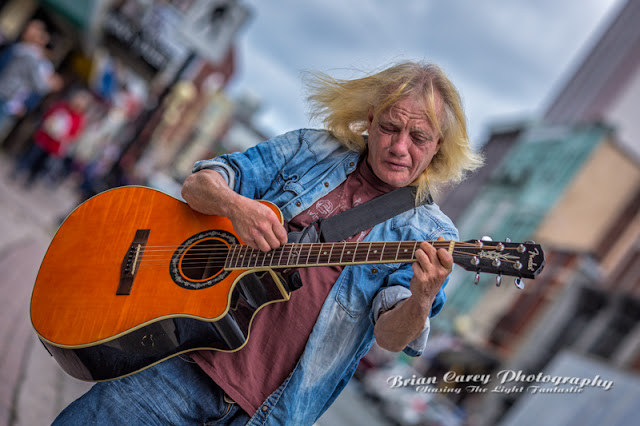 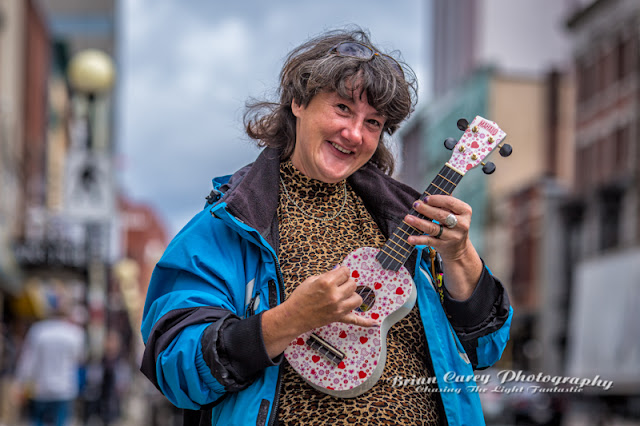 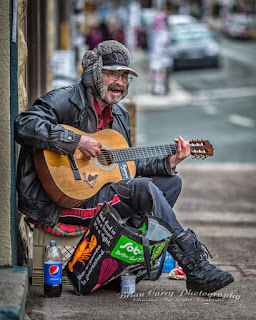 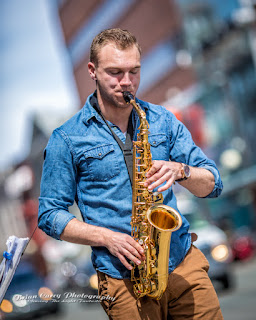 Thank you to all who gave, It will help keep our downtown alive. And thank you for stopping by!
Posted by Brian Carey Photography at 8:46 AM No comments:

My street photography project has lead me to become connected with many people from all walks of life. Some of these people have various social problems often associated with mental illness and substance abuse. Alcohol is almost always an issue for people with ongoing social problems and continued use is an obstacle for the support groups wanting to help.

Below is a photo of Harry taken yesterday. People have been giving him food, money and clothes to help him get by and here he was showing me three pairs of gloves he would like to give to someone who needs them.

Harry, or "Harry Gentle Heart" as I like to call him, has been living in the streets of St John's Newfoundland for the last few months despite the fact that various local support groups have tried to help him. His continuing use of alcohol is no doubt a problem.


Given the harshness of the Newfoundland winter living outside is a hazard! Raising awareness on-line and on social media may spark a glitter of hope.

Brian Carey Photography
I am a Newfoundland Photographer based in St John's.
Newer Posts Home
Subscribe to: Posts (Atom)